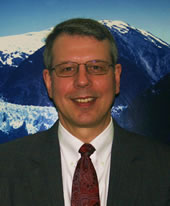 March 13, 2014, Juneau, AK – Don Habeger has been appointed by Governor Sean Parnell as the new Deputy Commissioner at the Department of Administration, filling a vacancy left by current Commissioner Curtis W. Thayer.  He leaves his current post as Director of the Division of Corporations, Business and Professional Licensing (CBPL) in the Department Commerce, Community and Economic Development held since July of 2010.  There Habeger managed an division of 84 employees with an annual budget over $12 million.  In fiscal year 2013 CPBL provided services to 66,894 businesses, 67,074 professional licensees, and 54,660 corporate entities.

“Don Habeger’s attention to detail, business acumen and professional experiences have prepared the new Deputy Commissioner for the diverse and complex divisions found within the Department of Administration,” said Commissioner Curtis W. Thayer.

Habeger’s broad background includes experience working for the Alaska State Legislature, being responsible for communications, promoting and advancing assigned bills, issue research, and scheduling. Before state service Don had extensive experience in government and community relations, having served as Director and Regional Vice President of Government Relations for a major cruise line. Habeger also worked for Cruise Line Agencies of Alaska, a subsidiary of Southeast Stevedoring Corporation, as Port Manager in Juneau. Prior to that, Habeger taught grade school and high school science courses and worked in the residential construction industry.

He moved to Juneau in 1979, after graduating with a bachelor’s degree in Behavioral Science from North Central University, in Minnesota and completed studies in the University of Alaska Southeast's Masters of Public Administration program.  Habeger resides in Juneau with his wife and has two grown sons.

His initial focus will be the oversight of the Division of General Services, Enterprise Technology Services, Division of Personnel and Labor Relations, Division of Motor Vehicles and Division of Risk Management.  Deputy Commissioner Habeger’s first day with the Department of Administration is March 31, 2014.